In my previous blog post AWS IoT First Reflections, I described my first AWS IoT platform reflections on implementing an AWS IoT platform for one of Metosin's customers. In this new blog post, I continue this AWS IoT journey considering where to store the IoT metric data.

In the previous blog post, I explained my experiments with the AWS IoT Analytics service and various pros and cons. The obvious benefit of using AWS IoT Analytics is getting a managed service as a turnkey solution. One disadvantage is the storage model, S3 based data lake, which is great for in-house analytics but might not be the best solution if you e.g., need fast queries based on certain IoT metric dimensions. A real relational database with indexing might be a better option in this case.

Why not have both worlds? Let's fan-out! The diagram below depicts the idea of fanning-out to two different data storages: S3 based data lake (AWS IoT Analytics) and traditional RDS - relational database as a service. 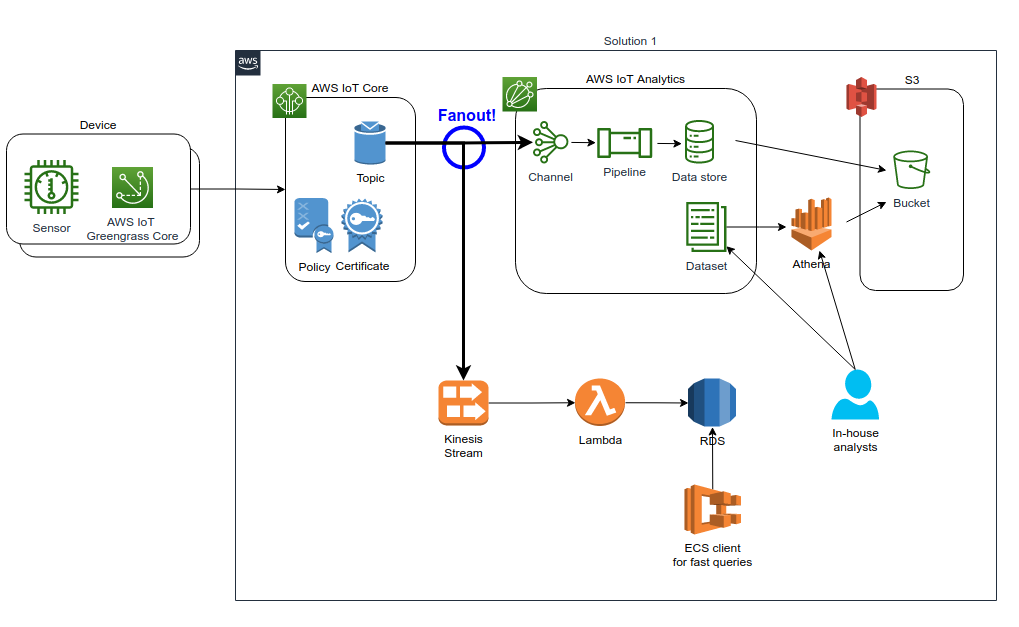 I already explained the IoT device → AWS IoT Core Topic → AWS IoT Analytics Channel/Pipeline/Data-storage → S3 path in my previous blog post. You can create various AWS IoT Topic Rules and use those rules to integrate the producer (the Topic) to some consumer. In the diagram, there is a fan-out circle which consists of two rules:

I already explained the upper part of the diagram in my previous blog post. Let's spend some time with the lower part.

So, we fan-out the messages also to a Kinesis Data Stream. I could have skipped the Kinesis part from the architecture since AWS IoT Core Topic also supports Lambda as an integration point. But I wanted to add the Kinesis Data Stream first so that we have an asynchronous buffer for the messages for some future use that we still don't know. E.g., you can add Kinesis Data Analytics to analyze the streaming data in real-time, perhaps trigger a notification for certain messages, etc.

We started our IoT journey with a simple solution using two services - AWS IoT Core and AWS IoT Analytics and, using those services, building a pipeline to store IoT metrics data to the S3 data lake. Now we have enhanced the original architectural solution by fanning-out the data to another pipeline that can provide real-time analytics and fast queries using a relational database. This is truly the power of AWS - there are a lot of various building blocks that you can use to implement a complex system that can serve different use cases.